The Harlan Hall Opera House is located at 603 Locust Street facing north and is on the southeast corner of the Courthouse Square at the corner of Sixth Street and Locust (originally known as Hamilton and Market Streets) in Marshall, Clark County, Illinois. The free standing brick commercial building measures approximately 40 feet by 125 feet an stands at its original prominent location in the downtown Marshall business district. The building is in the area designated as the Marshall Main Street and is just one block south of the original National Road, recently designated a scenic byway.

The property originates with the purchase of a section of land from the Federal Government by William B. Archer and Joseph Duncan in 1829. Marshall was founded in 1835, and the first recorded entry for lot 3 & 4 of Block 38 was on August 13, 1835. The property-changed ownership several times until February 20, 1861, when it was purchased by Howard Harlan for $140.1 He constructed his magnificent opera house in 1872 on lot #4 at an ideal location that was one block from the National Road, three blocks from the Archer House Hotel, one and a half blocks from a proposed railroad station, and across the street from the county courthouse. The building was designed as a spacious opera house on the second floor with the convenience of a "drive-in" livery stable on the first floor.

In a newspaper article about Marshall from the mid 1870's it reads as follows: There has been erected in Marshall during the past few years, some very fine buildings, in which all her citizens feel a just pride, among which may be mentioned Harlan's Hall, erected at considerable cost of Howard Harlan, Esq. The Hall is 40 by 100 feet, with a twenty foot deep stage supplied with a beautiful drop curtain, and very fine scenery. It is well ventilated, and easy of entrance and exit. It is as fine a City Hall as there is in the West for a city the size of ours.

The building is of Italianate architecture with a steep pitch roof wide overhanging eaves, tall narrow arched windows, and heavy brackets under the eaves approximately six and one half feet apart around the entire perimeter of the building. This was the style of the period and matches the many remaining 1800's buildings in the downtown, all in style at the time. The building is on a stone foundation and of solid brick construction With walls three and four courses thick. The large upper double-hung windows are 4 over 4. A standing seam tin roof. Two original brick chimneys remain on the north front of the building. The roof is supported by massive timber trusses as there are no interior pillars or supports in the entire second floor hall area. The 40 foot by 125 foot two story building consists of 10,000 square feet over the two floors plus an extensive balcony. 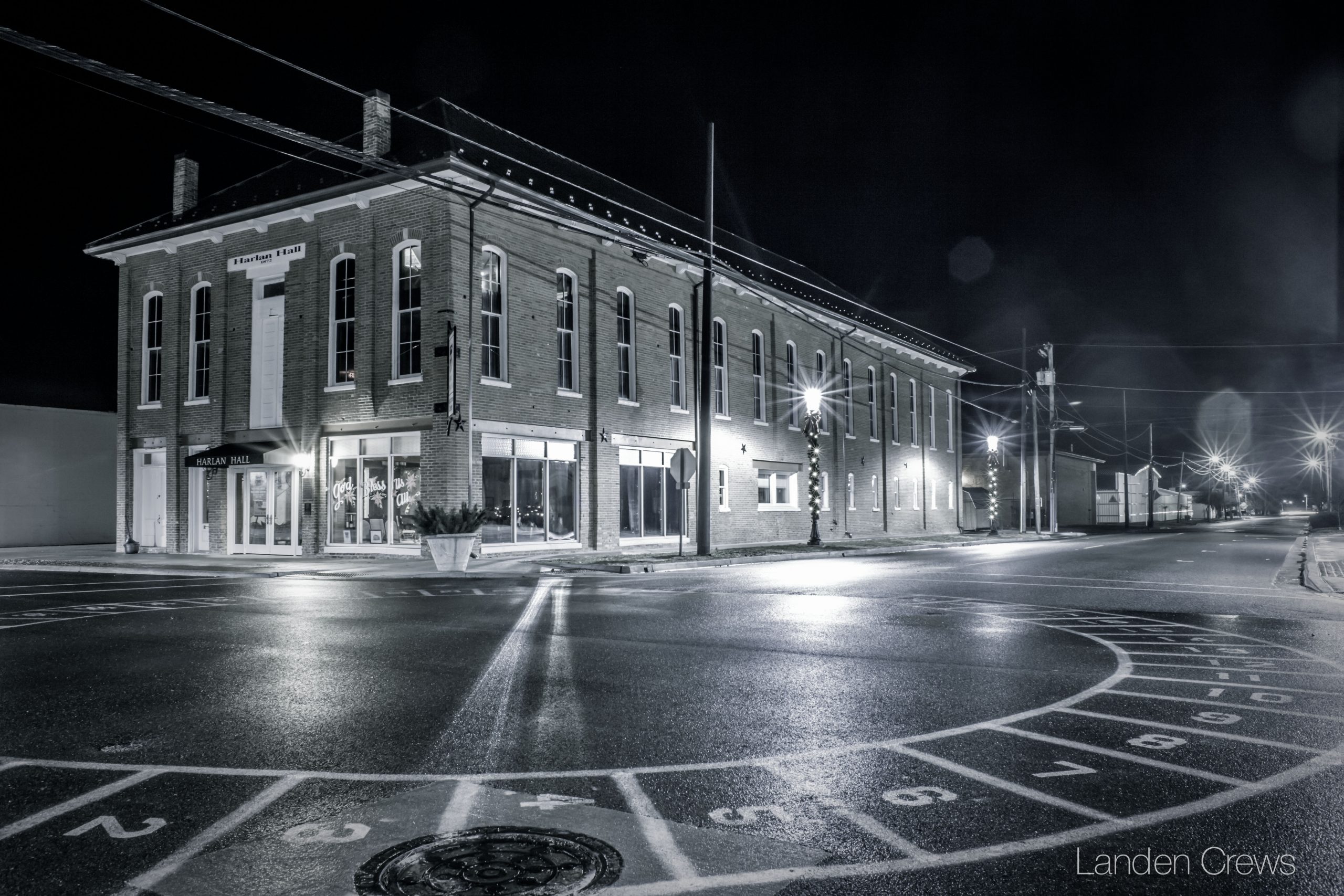 The footprint of Harlan Hall and the general physical appearance a little changed since construction. The most significant changes were made prior to 1920 with structural steel supports placed above some of the first floor windows to enable larger display windows on the northwest corner. Lower floor windows and doors on the east side were brick up when a frame one-story building was constructed against the east side This building was demolished many years ago and is now the parking lot. Several chimneys on the east and west sides of the building were also removed. Interior changes where made at this same time and also in the mid 1950's. The building has been painted for many years, but with considerable weathering it will be relatively easy to return to its original appearance. Plans are to clean, tuckpoint, and restore the building to its natural brick.

The present condition of the buildings interior has been completely renovated since 2000 with new insulation, partitions, new oak doors and trim, on the first floor. Entire building has new electrical, new structural steel and reinforced beams for second floor, all new plumbing complete with full modem kitchen 3 handicapped accessible wash rooms, and self service elevator serving 1st, 2nd, floor and balcony. Extra stairs have been added to meet all safety issues. The building has seven (7) new furnaces with all new duct work serving the entire building. All missing glass has been replaced and interior storm windows are on all openings plus heavy insulation was added to attic to make the building more energy efficient. A new retractable stage is installed complete with theatre lighting and curtains. There are separate sound systems in place on both first and second floor, complete with cordless microphones. A projector and large screen are available for presentations. A new standing seam tin roof and new gutters were added in 2010. A grant has been received to complete exterior tuck pointing, repair window sills, door and finalize the exterior appearance.

The second floor and balcony are now officially the interpretive center for the National Road. We have displays regarding the construction of the National Road from the early 1800's+ a mini museum of local artifacts. We have tremendous interest for building use: with many receptions, weddings, reunions and local functions. It is an active community center just as it was in the late 1800's.